Trying to get around the Apple developer documents is a nightmare. There aren't hyperlinks to keywords so you have to switch back to the index; subjects aren't discussed in great detail - how to use AudioUnitGetProperty etc. Even Microsoft's documentation is more complete than that! Wow! Way to go Apple!
Posted by Pete Goodwin at 11:25 am No comments:

I'm toying around with Parallels on my Mac. I'd like to try VMWare Fusion but no key (probably on my mail elsewhere). As an experiment, I tried my Windows version of Melody Mine and found it doesn't work!

Turns out it's a MSVCR80.DLL dependancy. And a bug in my manifest file supplied with Melody Mine - it refers to V9 of the runtime (as I've got VS 2008 Express). Remove the reference, it works fine.
Posted by Pete Goodwin at 10:32 am No comments:

Last time I tried to create a VST host, then bolt Melody Mine on the front of it... well, it didn't really work. That may have been due to using Delphi to create everything (Delphi doesn't do so well with floating point exceptions). Now that I'm using C++ with wxWidgets, maybe it's time to try again.

Meanwhile, playing around with Audio Units on my MacBook seems so much easier that VST + ASIO on Windows! I've modified my keys application to use the Apple Synthesiser, so I may try the same with Melody Mine (which uses Port MIDI - this requires an external synthesiser to make any sounds). That may mean I drop PortMIDI and use my own classes to talk directly to the MIDI API on Windows and AU on MAC.
Posted by Pete Goodwin at 10:27 am No comments:

A facelift for Melody Mine - replaced the song grid with a custom grid of my own. Editing with it is much easier.
Posted by Pete Goodwin at 9:12 pm No comments:

"CodeGear - the unwanted Borland Software subsidiary its parent pimped on the market for about year but failed to find a buyer for - is trying to give JBuilder a lift in a commoditized market, but risks sapping energy that could go into less visionary but more immediately useful coding tools.®"

Read the full article here.
Posted by Pete Goodwin at 6:25 am No comments:

Ported the Windows only code that writes out MIDI to a cross platform version for the Mac. Seems to work on the PC.
Posted by Pete Goodwin at 8:09 pm No comments:

I switched my midi output to PortMIDI - got it working on the PC and fixed an annoying bug. Took a while to get past build issues on the Mac but got that working too, though the setup is not as simple as the PC.
Posted by Pete Goodwin at 8:57 am No comments:

Melody Mine now has Lua scripting...

Here's a short Lua script that truncates notes in a pattern in my MIDI editor, Melody Mine.

Posted by Pete Goodwin at 11:43 pm No comments:

It's getting there... the PC version can play music and export to MIDI files. The Mac version won't have that for a while.
Posted by Pete Goodwin at 11:30 am No comments:

"We are pleased to inform you that the Board of Directors for Sonaptic Ltd have agreed to the acquisition of the company by Wolfson Microelectronics plc."

http://www.wolfsonmicro.com/sonaptic.do
Posted by Pete Goodwin at 7:30 pm No comments: 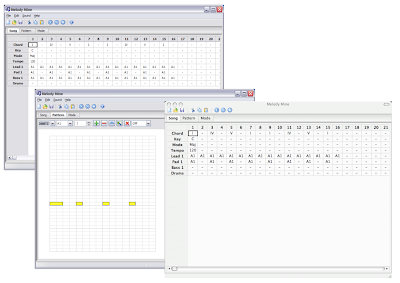 Melody Mine (Windows and Mac versions)

The new Melody Mine...

Yet another version of my music sequencing tool - I'm still working on it.

I've gone back to MIDI output (file and device) as that's the easiest way to get it to work without diving into the murky world of VST hosting.

The pattern editor is like a piano roll but with only seven notes, instead of the usual twelve. Why seven and not twelve? Well, written music uses seven notes from a scale (quoted at the start), so why shouldn't a pianoroll?

Posted by Pete Goodwin at 8:13 pm No comments:

I didn't know I was German?

Need to change it?

Posted by Pete Goodwin at 7:39 am No comments:

I see both websites for Sensaura and GameCODA have finally gone.

Sigh.
Posted by Pete Goodwin at 7:32 am No comments:

This week is the week I get my house decorated - just a few minor operations - repainting the front, the garage door and revarnish the front door. The porch has been repainted as well as one intrernal wall.

Things are moving forwards on renting a flat near where I'll be working; never rented a flat before. This should be interesting!
Posted by Pete Goodwin at 7:33 pm No comments:

Last night a group of Sensaurians got together to remember Sensaura. We started in a pub in Windsor, then some of us moved to a restaurant for a meal. It was strange seeing old faces again...

It seems we're disappearing off to different places all around the UK. I'm off up north shortly, some maybe headed down south.

In the past, when I've moved on, I've lost contact with most of the people I knew. I have two or three left who I still hear from on occaison.
Posted by Pete Goodwin at 5:04 am No comments:

The changes are here.

I've been made redundant.

Sensaura as a group no longer exists...

I was there for eight years, and now it's over. Some parts live on - Sonaptic is going strong. Also, while the name Sensaura is gone, there are five people left from the group of about twenty. The rest of us are going our seperate ways.

I start my new job shortly...
Posted by Pete Goodwin at 3:30 pm No comments:

I got my job at Digital through an agency; my current job through another... ten years on, there are too many agencies out there, and the quality of them seems to have fallen. You apply for a job, you get an initial contact and... that's it. Nowt. Nada. Zip. If you pester them, they don't bother to respond.

More on this later...
Posted by Pete Goodwin at 3:22 pm No comments:

CodeGear (who? They're part of Borland) have released Delphi 2007 for Win32. They fixed a few bugs and added support for Vista - but not much else. A very expensive upgrade with little goodness in it. No thanks, after Delphi 2005/2006, they've have to pull some really big rabbits out of their hat before I burn my fingers again!
Posted by Pete Goodwin at 8:36 pm No comments:

My laptop was getting old - a 700MHz Celeron. It wouldn't run Windows XP but did run Ubuntu. Never could get WPA wireless to work on it though.

I thought about getting an Apple MacBook, even more so since they had an Intel version out. So, I bought one before Christmas. It's like Linux but with a desktop and decent applications.

The "finder" application seems to be the worst part of it - a bit of a mess, I think. The Wireless network seems to have issues too but I think I've got that working now.

Firefox and Thunderbird all work on Windows, Linux and Apple - why use anything else?

(Today I'm using IE7 due to an issue with Firefox and Blogger)
Posted by Pete Goodwin at 8:32 pm No comments:

Just before Christmas, my Peugeot 206 let me down - it started misfiring or randomly stalling. It took a few weeks and several hundred pounds to fix it - a stuck injector. I was already disappointed with this car - it went well enough but seemed to have a few electrical issues: central locking failed after two years (I had to fight to get it fixed under warranty), A/C made the engine almost stall in stop/start traffic, A/C + fan switch would stop working one day and work fine the next, and finally the alarm system kept going off, waking me once in the night.

So I traded it in, and bought a Honda Jazz, with a 1.4 CVT engine. It's my first automatic, and my first five door car. I was a little concerned that it might not perform too well - was 1.4 too underpowered? That doesn't seem to be the case - its a quiet efficient engine, and a real pleasure to drive.

The salesman did tell me a few wrong facts about the Jazz: I asked if when the immobiliser was switched if there was a red light flashing on the console - there isn't, the salesman said he thought there was. Also, on the day I picked up my car, he said it had an electric heater to help clear the windows in cold weather - this simply isn't true.

Some options on the Jazz puzzle me - why the continuous rear wash wipe unless you buy a sport model? Why not offer it as an option?

I had planned on buying a second hand car perhaps a year old or younger... the Jazz brand new was more or less the same price as a year old model, so I went for a new one.
Posted by Pete Goodwin at 8:21 pm No comments: