I can't remember the last time I tried Linux. It always offered so much promise, but then failed to deliver. So, I decided to try building a Linux box again. Since I've upgraded to a newer PC, I put my Athlon 2200+ to one side for Linux. I installed the latest Ubuntu...

Ah yes, Linux. I remember it well. It just... doesn't... quite... work. That's why trying an Apple Mac was such a breathe of fresh air. It actually works! Wow!
Posted by Pete Goodwin at 5:59 pm No comments: 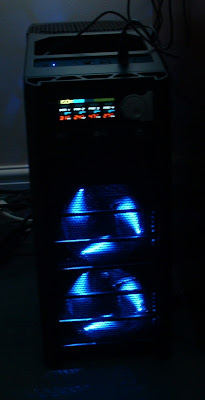 I ordered the parts for my new PC on Moday, they turned up Tuesday...

I started putting it all together, and found a few minor issues. I'd chosen to base my build on what Scan use for their 3XS range, figuring if that's what works for them would probably work for me. The case is a gamers box with transparent sides and large, quiet fans. The first minor issue: I didn't expect to find the power supply had to be at the bottom, and upside down. The second was the size of the CPU fan. I could see problems trying to fit the thing. I watched a flash movie on the Zalman site and it made sense but I felt trying to screw down a sprung loaded bar might not be that simple. In the end, it went in, with a few mutterings.

I powered it all up and was rewarded with the BIOS screen. Ran memtest for a couple of hours and it was fine. Temperature seemed much better than I've seen with my Athlon 2200+ where it regularly hit 70C. This one was running at 40C (CPU) and 35C (motherboard). The big fans are a bit noisy, but they are quieter than my aging Athlon (aging? It's not that old!).

Since I've switched on ASUS Q-Fan, the CPU fan is running much quieter - seems every other fan is low speed, big and quiet...

So what I've got is an Intel Duo with four cores, 4GBytes of RAM (not all of which is visible), 8800 GT graphics, 750GByte SATA drive... all in a colourful box with blue lights and a green glowing CPU fan. Be interesting to see it do some raytracing once I've got everything set up - with four cores that ought to be a sight to see.
Posted by Pete Goodwin at 1:14 pm No comments:

I took my Honda Jazz in for its first service a while ago. There I chatted with one of the salesman who told me about the new redesign of the Jazz appearing later this year. He seemed to think I might be interested in upgrading to the latest model... unlikely, if the car is as reliable as my last Vauxhall Astra, I plan on keeping it for at least 15 years!

Oh, and he said that generally older people (people over 50) buy Jazz's. Oh dear! Did my Zimmer frame give the game away?
Posted by Pete Goodwin at 6:22 pm No comments:

Vista not for me

My laptop has Vista, and once I got past the crashing issues - fixed with a BIOS upgrade, everything has been fine. But Vista is nothing to write home about. The gadget bar is useful but everything else is... well, what's the point?

If I repeatedly do something that require's priv's, it repeatedly asks me again and again to accept it. Gee, Microsoft, where did you dig up your usability guide from? Using my Mac was a much more elegant affair and I'm not running the latest and greatest yet!

Finally, discovering my scanner is compatible with Vista is frankly, not amusing.
Posted by Pete Goodwin at 6:16 pm No comments: